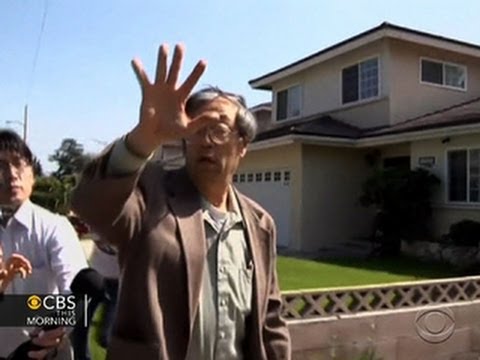 Bitcoin - The Currency of the Internet

A community dedicated to Bitcoin, the currency of the Internet. Bitcoin is a distributed, worldwide, decentralized digital money. Bitcoins are issued and managed without any central authority whatsoever: there is no government, company, or bank in charge of Bitcoin. You might be interested in Bitcoin if you like cryptography, distributed peer-to-peer systems, or economics. A large percentage of Bitcoin enthusiasts are libertarians, though people of all political philosophies are welcome.
[link]

A synopsis of events compiled from the story:
The story's background information suggests Dorian Nakamoto might have had the means and motive to create Bitcoin, but there's nothing directly pointing to him as the creator of Bitcoin. There's no electronic trail leading to him. There's no hard evidence that this man even knows what Bitcoin is.
Dorian's statements in his driveway could be interpreted in a number of different ways given the sequence of events and statements by relatives.
I'm not convinced.

What's the difference between the Newsweek Bitcoin story and the Grantland Dr. V story?

In terms of journalistic ethics.
Obviously the Dr. V backlash came later and the turn in terms of the ethical conceit followed it.
In this case the backlash has been instant, but it "seems" that the journalistic community has supported the newsweek writer and it will be interesting tos ee where it goes. But I thought I'd ask about it here, see if anyone ahd thoughts.

Is anyone over here in r/journalism following Newsweek's bitcoin story? What are your thoughts on the article's reporting and investigation? Links to arstech article -the colossal arrogance of Newsweeks bitcoin scoop

Newsweek retracts a story that claimed Vegas gunman Stephen Paddock's girlfriend Marilou Danley was married to two men at once and used two SSNs. Next they'll be claiming she invented Bitcoins.

The Newsweek reporter who wrote the Satoshi story, Leah McGrath Goodman is currently being trolled in email by someone claiming to be from Bitcoin. She believes them.


1/3 Received mystery communique re a #Bitcoin, written in the royal "we," very similar to #Bitcoin paper from 2008...


3/3 ...and offers a series of clues, like a treasure hunt. Ends with: "You are such a talented journalist and we enjoy all of your works."


It is really any surprise that this is the same reporter who published Dorian = Satoshi on the cover of a national magazine? The last line was pretty blatant in terms of giving away the troll/joke.

Bitcoins stolen from Mt. Gox are on the move while everyone is distracted by the bullshit Newsweek story.

Newsweek's Editor in Chief explains decision to put the controversial bitcoin story on the cover of their debut return to print: "Go large or go home. This is Newsweek. We are raising the dead here. And you know what? People are aware of it now."

Bitcoin Community Goes Into A Rage Over Newsweek Story

Do you think Newsweek's cover story is a net gain for Bitcoin?

They say any publicity is good publicity except your obituary. A lot of people in this community are still pissed off at what happened, but think three months, six months, one year down the line. How many people are going to be able to say they finally got interested in Bitcoin because of this ruckus?

"Outrage, disbelief as Bitcoin creator outed" How much time did Newsweek give Mr. Nakamoto to secure is family before publishing their story that doxed him

Anything For a Good Story – Newsweek Crucifies Supposed Bitcoin Founder

What Newsweek has actually published is a pretty good internet story speculating about the identity of Bitcoin’s founder. If it had been just an internet story – pick your venue: Gawker ... Angebliche Enthüllung von "Newsweek" Rätselraten um Mr. Bitcoin von Christoph Fröhlich 07.03.2014, 19:08 Uhr Bislang war der Erfinder der Bitcoins unbekannt. Newsweek's cover story reveals a man named Satoshi Nakamoto, who matches many characteristics of the elusive founder of Bitcoin but never explicitly admits to it. Via Newsweek hide caption Newsweek reporter Leah McGrath Goodman discusses her story on the founder of Bitcoin Newsweek made its return to print this week with a story claiming to have exposed the creator of bitcoin, but while the story is generating a lot of attention, it's also raising serious questions ...

Newsweek Says It Found The Inventor Of Bitcoin

March 17 (Bloomberg) -- Bloomberg Contributing Editor Paul Kedrosky discusses the latest news on the report that the father of Bitcoin has been found. Kedros... Newsweek says they've found "The Face Behind Bitcoin" in time for their first print issue since 2012. Follow Lauren Gores: http://www.twitter.com/LaurenGores... Newsweek magazine reportedly tracked down the mastermind behind the digital money known as Bitcoin. Vinita Nair reports on the media frenzy surrounding 64-year-old Dorian Satoshi Nakamoto. HEADLINE: Man denies he's Bitcoin founder ----- CAPTION: In an extensive interview with the Associated Press, the man Newsweek... March 7 (Bloomberg) -- Tina Brown, former Editor-In-Chief at Newsweek and founder at Women In The World, discusses Newsweek's return to print with a claim of finding the creator of Bitcoin and her ...